skip to main | skip to sidebar

Finally got a new home for myself. Many many thanks to manas for this nice gift. :-)

Update your links and feed url.
Posted by Harishankaran at 3:40 AM 1 comment:

Wikipedia says
"The term blue may refer to any of a number of similar colors. The sensation of blue is made by light having a spectrum dominated by energy in the wavelength range of about 440–490 nm.
Blue is considered to be one of the three primary additive colors in the RGB system; blue light has the shortest wavelength range of the three additive primary colors. The English language commonly uses "blue" to refer to any color from navy blue to cyan."

Some strange facts ( of course i googled for them :P )
Well enough of facts, I'll tell you some more nice facts :P :P

Saw this small snippet for string reverse in python

To know more about slice notation you refer to the python python doc.
Posted by Harishankaran at 1:42 AM 6 comments: 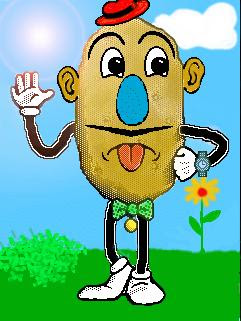 I wasn't sure why people celebrate shutdown day and all. The whole idea looked stupid. :P But it was not so.
Our college network was shutdown yesterday. No Gmail. No Orkut. No Spider. No Delta. Nothing :P
All i had was 2 or 3 computers with Linux and Windows :). Many many thanks to all the Gnome and KDE games, the day wasn't that boring. In fact, i don't mind having shutdown day once in a week :) :) :)
The good thing about shutdown day is that even if you want to work, you can't. :-). So you don't feel bad or guilty about not working for one whole day. :-) :-) :-)
Some of the nice games which are worth playing are
1. Attax
2. KAtomic (Even those who don't like chemistry might end up playing this for hours :) )
3. Kolf
4. Potato Guy
5. Iagno
Posted by Harishankaran at 3:38 AM 5 comments:

Working on any product which is not yet released and developed by hackers all over the world ;) gives you sweet surprises every now and then ;).

I have already mentioned how the form elements are made better in FF3.0 in http://sp2hari.blogspot.com/2007/06/firefox-3-ui-rocks.html

The next surprise is Bookmarks ,FTP browsing and Downloads window :-) :).

Check out the screenshot for yourself 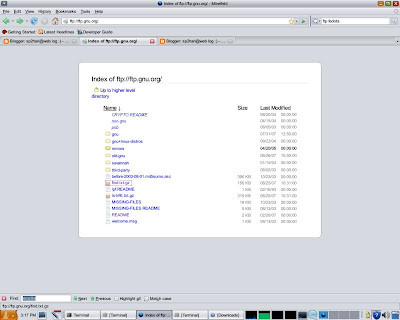 Next one is the way bookmarks are added. Just like starring a mail in Gmail.
Check this screenshot. You can see a star there right in the Location bar right?

Next time you click it, you get bookmark options :)

Finally, the downloads window is more colorful now, with some new images :) 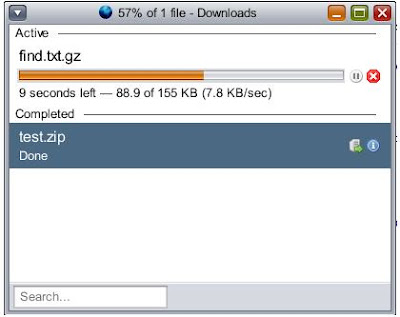 The search in the downloads is a cool feature :)

Hmmm, these are some of the features which i could notice while testing firefox. Not sure how much more is there :-). Really firefox 3 is going to rock :)
Posted by Harishankaran at 2:43 AM 3 comments:

Recording your screen in solaris :)

Recording your screen in Solaris works right out of the box. All you need to install is vncserver and vnc2swf.

A simple HOW TO about recording your screen in Solaris. :)

First you need to install Vncserver. Solaris by default doesn't come with a VNC. The easiest way to install VNC is through pkg-get

Before running that command, configure your pkg-get to get the packages from blastwave.org. Check http://www.blastwave.org/howto.html to get more details about setting up the repo.
That should install vncserver. :)

Next step it to install vnc2swf.
Download the C version of vnc2swf from http://www.unixuser.org/%7Eeuske/vnc2swf/index.html.
Extract the tar ball

The commands mentioned above will install vnc2swf . :)

All you need to do to use vnc2swf is to start a vncserver. vnc2swf just needs the output file name to be passed as command line argument when started. Pressing F8 gives the options to start, stop, pause and clear the reocrding.
Some of the issues i faced are :)

1. When the same user tries to start a gnome-session in the vnc, an error message saying gnome-session is already running is given. So the best bet is to create a new user and start the vncserver of that user.
2. The icons are not displayed properly if you login into the new user's account using GNOME. Use Common Desktop Environment (CDE) to login and start a vncserver.
3. By default, the new user won't have a .vnc folder. So start a vnc and kill that. Now you will have .vnc folder with a xstartup file. Modify the file so that gnome-session runs in the vnc instead of the default twm. The xstartup file should look like


And yeah, what i recorded can be viewed at http://download.freedesktop.org/ldtp/movies/screen2.html. Nice right ;-)

Posted by Harishankaran at 1:30 PM No comments:

My Tinderbox is working...

Yes, you heard it right. My tinderbox is working. Even now i don't know why i was trying to setup a tinderbox after both Emily and Nags asked me to concentrate on Firefox automation. I felt it was almost done and just few more steps, i will be able to set it up. And that's what finally happened :)
So in this post, i am going to mention about all issues i faced in setting up a tinderbox and steps to fix them.

Note :: If you are ever setting up a tinderbox, be prepared to see huge log files. Like once my compilation ran for few hours and produced a log file of size 15MB. And if you are stuck up, DON'T send the entire file. A tail of that file should do. In fact, you should be in a position to find out from while line the exact error starts.
Yeah before you start reading this
http://sp2hari.blogspot.com/2007/06/conquered-solaris.html and
http://sp2hari.blogspot.com/2007/06/tinderbox.html has instructions about how to setup Tinderbox in Solaris environment.

Ok the first error i got was

The above steps should install the patch in your system. To check whether the patch is installed properly, check the folder /var/sadm/patch/. You should see seperate directories for each patch you have installed. In my system here, the /var/sdm/patch is like
# cd /var/sadm/patch/
# ls
120759-06 121016-05

That fixed the above problem :).

The next error i got was

Now this is a strange problem and which can be fixed without much issue. You need more RAM. My system had 768MB (512+256) RAM, but you need 1GB RAM to fix this issue. So next day i got 1GB RAM and never got this error back.
After that, i got many compilation errors. This happened because of some issue in the mozilla code. This generally never happens. I got errors in lines having inline. Anyway now i am not getting the error anymore. So i think the mozilla code is fixed now. :)
Finally i got an error saying,


(firefox-bin:6432): Gtk-WARNING **: cannot open display:
----------- End Output from Profile Creation ---------
ERROR: profile /export/home/hari/tinderbox/SunOS_5.11_Depend/.mozilla/firefox/ does not exist
no pref file found
The solution for the above bug was to allow connections to X server. This is done by executing the following command before starting a tinderbox compilation. Remember the user who is running the tinderbox should execute the command.
hari@home:~$/usr/openwin/bin/xhost +
access control disabled, clients can connect from any host

Posted by Harishankaran at 12:12 PM No comments:

Updates about SOC.
30 test scripts are working fine without any issue :). My target is to write 50 test cases and i will try to reach that this weekend :) :).

The scripts can be downloaded from here.

Things to be modified when you run your script in your environment are.
1. In the file firefox.xml, change the value of <filepath> for so that it points the file called index.html in the folder called data in your scripts directory.

Let me give a detailed HOW TO for running these scripts.

1. First, LDTP must be installed in your system.
The CVS page in ldtp.freedesktop.org provides the instructions for getting the LDTP code through CVS.

Note : I had a small issue compiling the code which i got from CVS.
While using ./configure it gave me an error saying

The above error is because autoconf and pkg-conf are installed at two different locations. For more details check http://lists.freedesktop.org/pipermail/xserver/2003-December/000573.html

So i used this package which compiled without any issue :).
For more details on how to install, check here.

3. Download and start Firefox3.0a*pre from here ( Any FF3.0 alpha release should work, though with FF3.0a8pre, it is tested throughly.
Note :: When you start firefox, make sure you don't have any other instance of firefox running.


If you have set LDTP_DEBUG=1 in your shell, then it will show lots of output. Don't get scared. It only means things are working fine :)
Note :: You can also work with LDTP_DEBUG unset, if you want a "clean" output.

Once that command is executed, then it will run the test cases provided in the run.xml.

A file called log.xml gives the details about the test cases run. The last three lines in the log file should be like this if the test case ran properly for all the 30 test cases provided.

The screen record video on Solaris 11 is given can be viewed from here.
http://download.freedesktop.org/ldtp/movies/screen2.html

The current status of the test cases can be viewed from here.
http://ldtp.freedesktop.org/wiki/Firefox_Test_Cases
Posted by Harishankaran at 5:53 AM No comments: